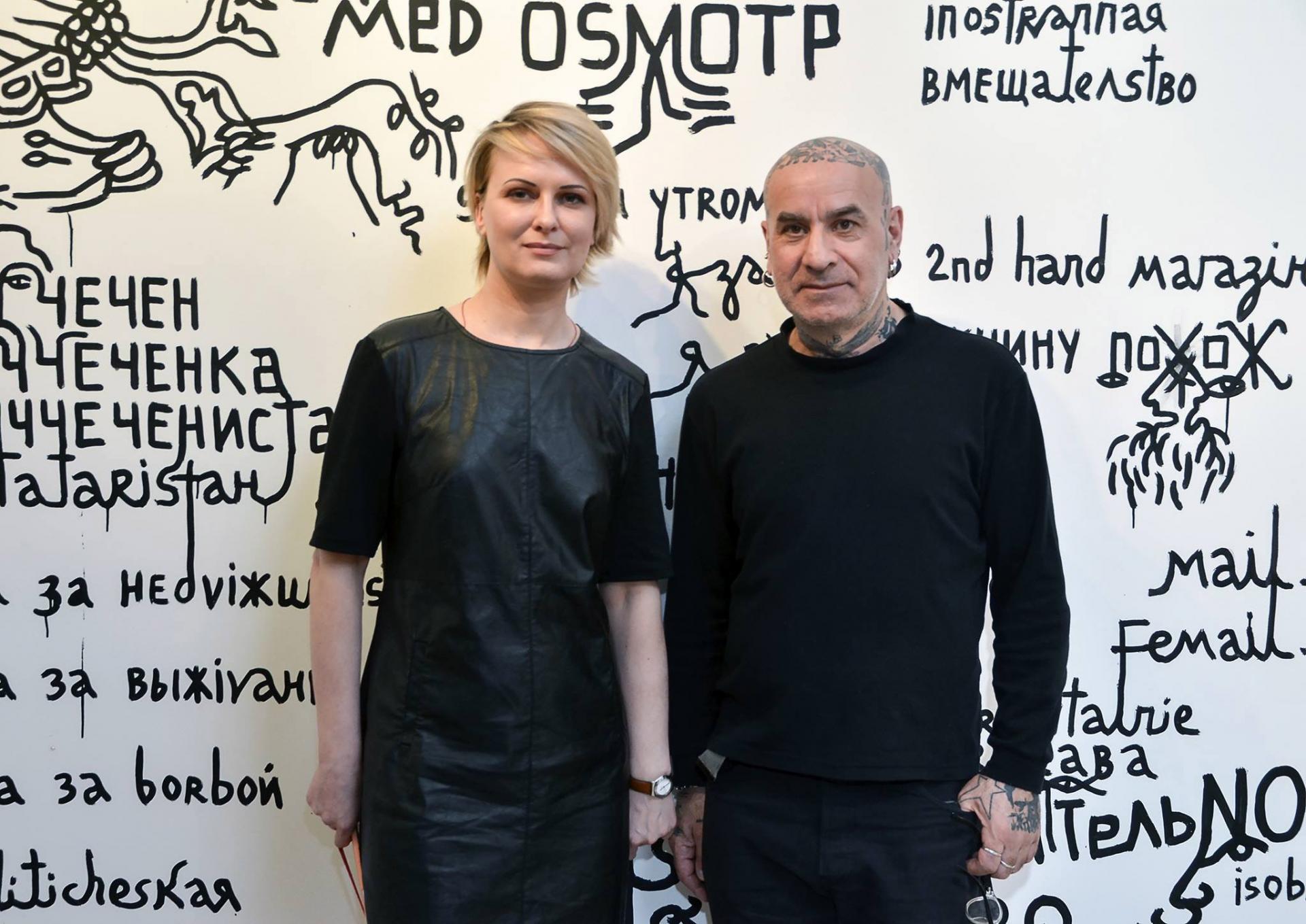 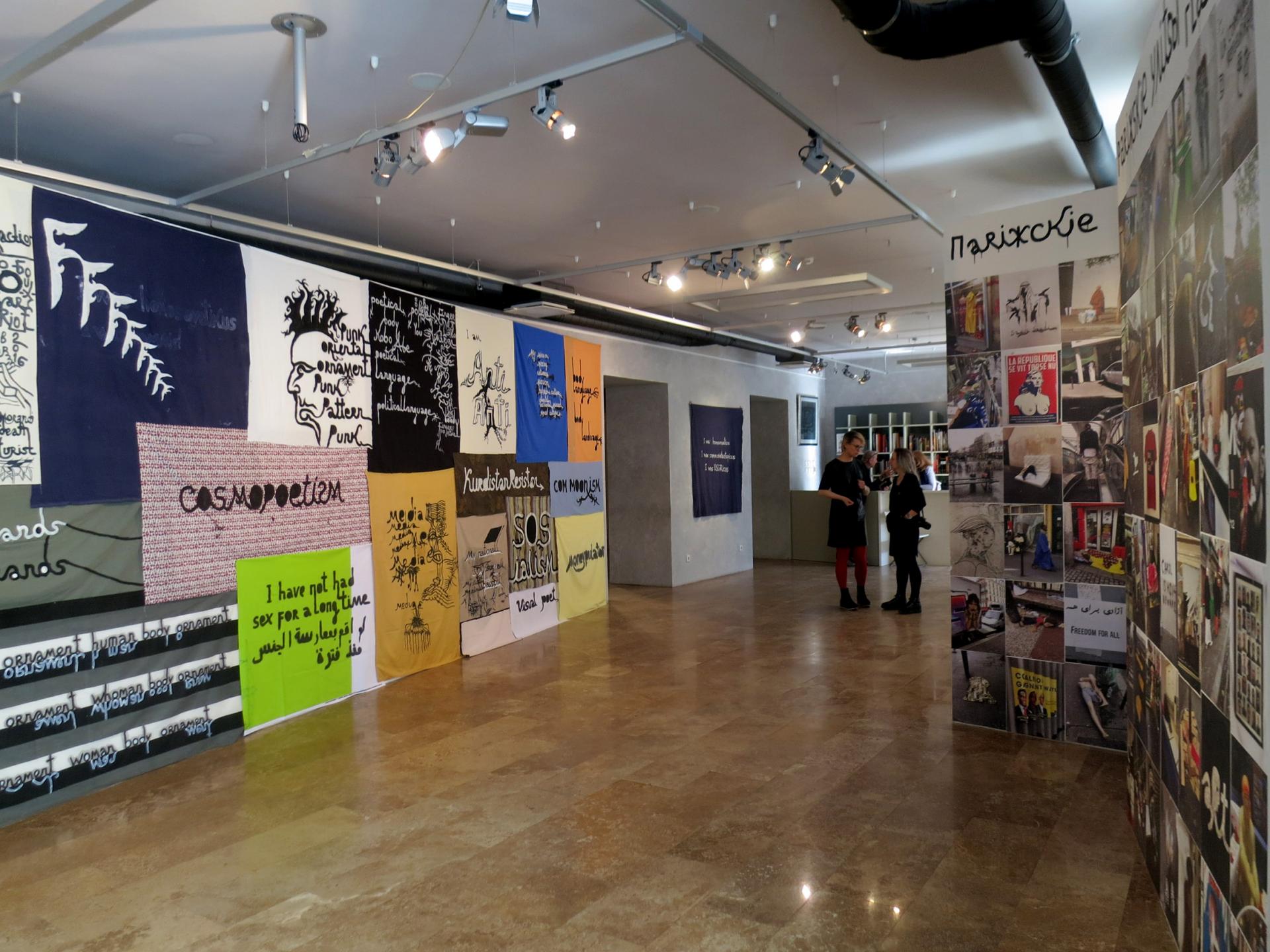 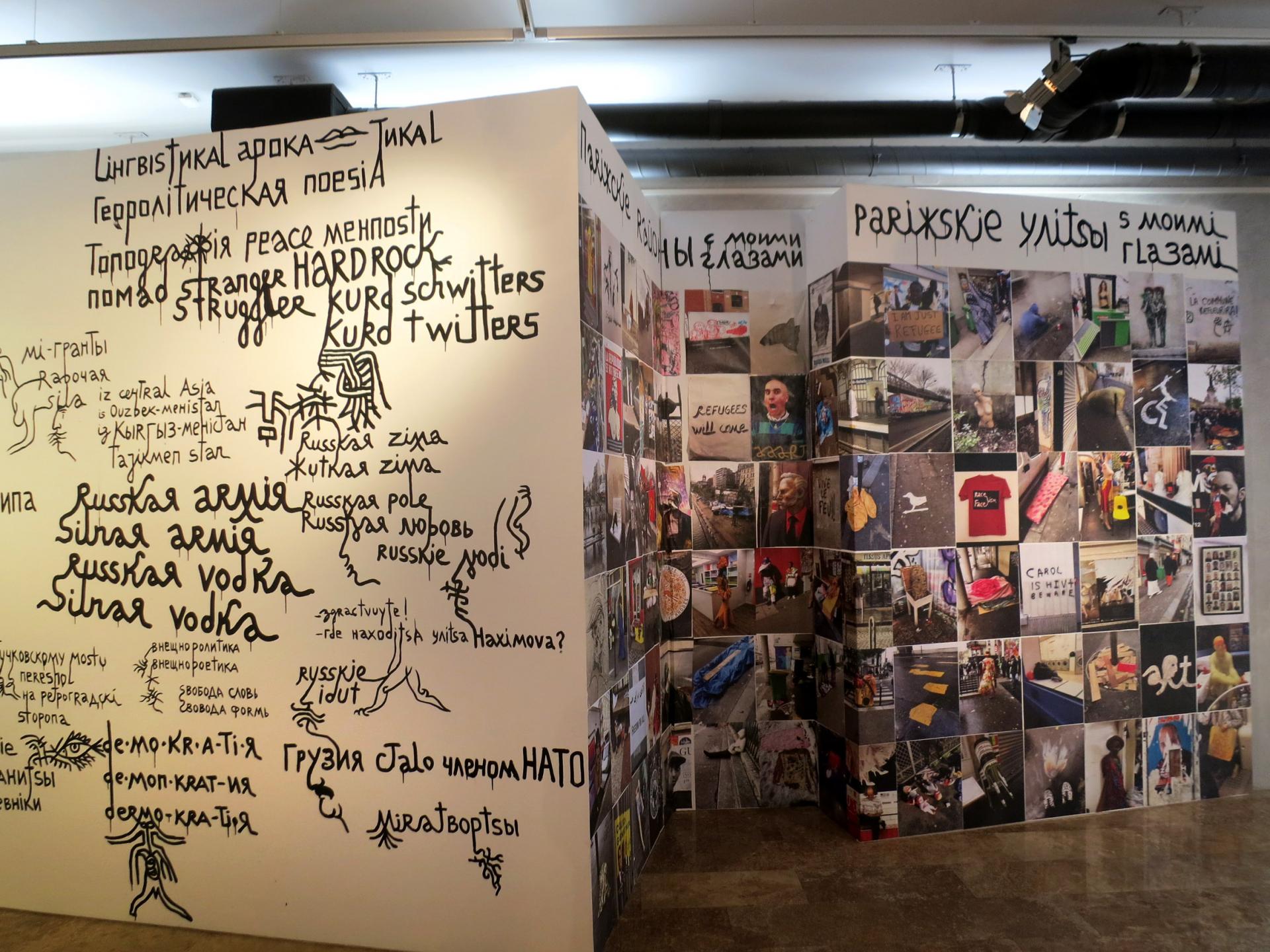 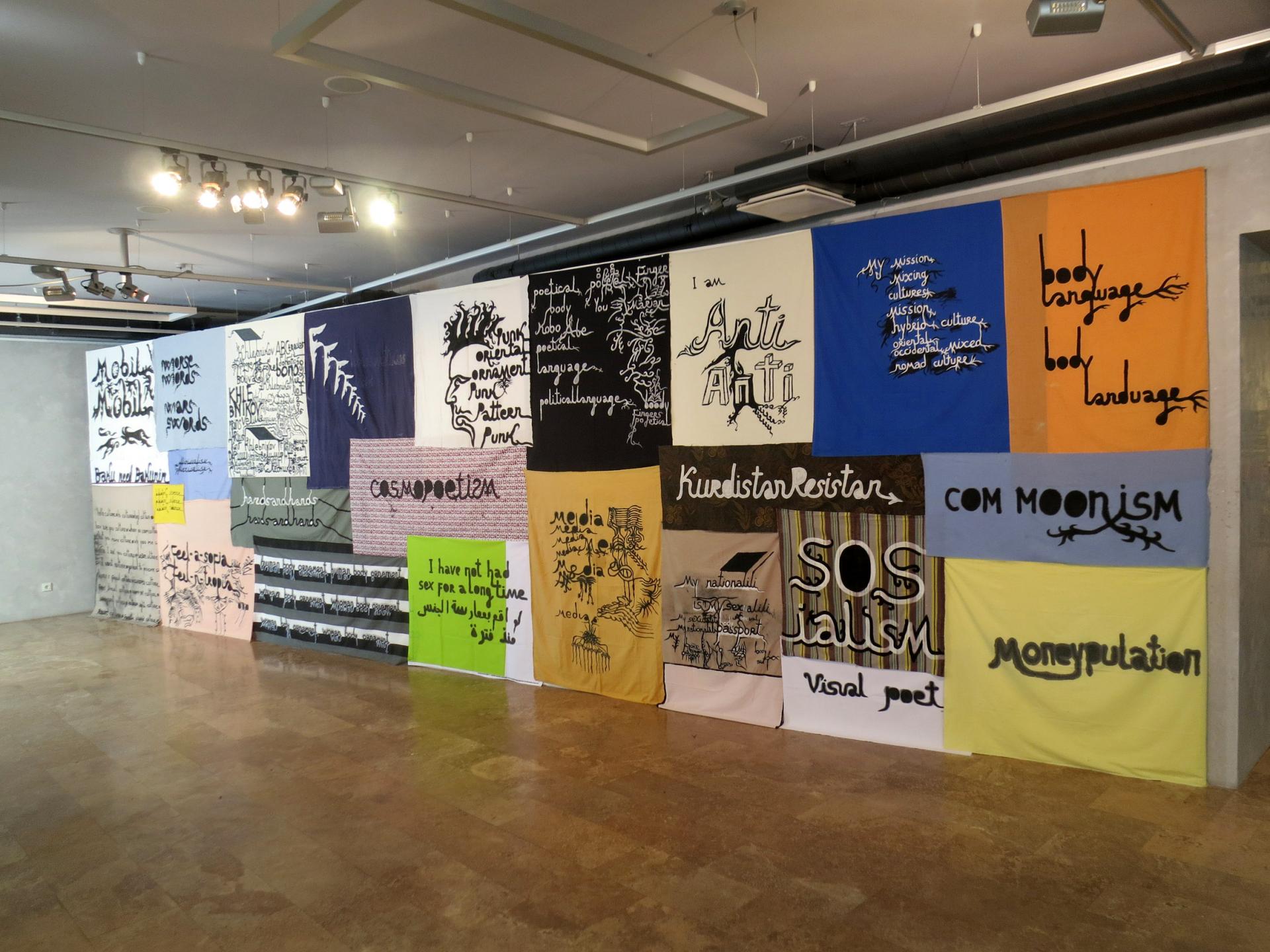 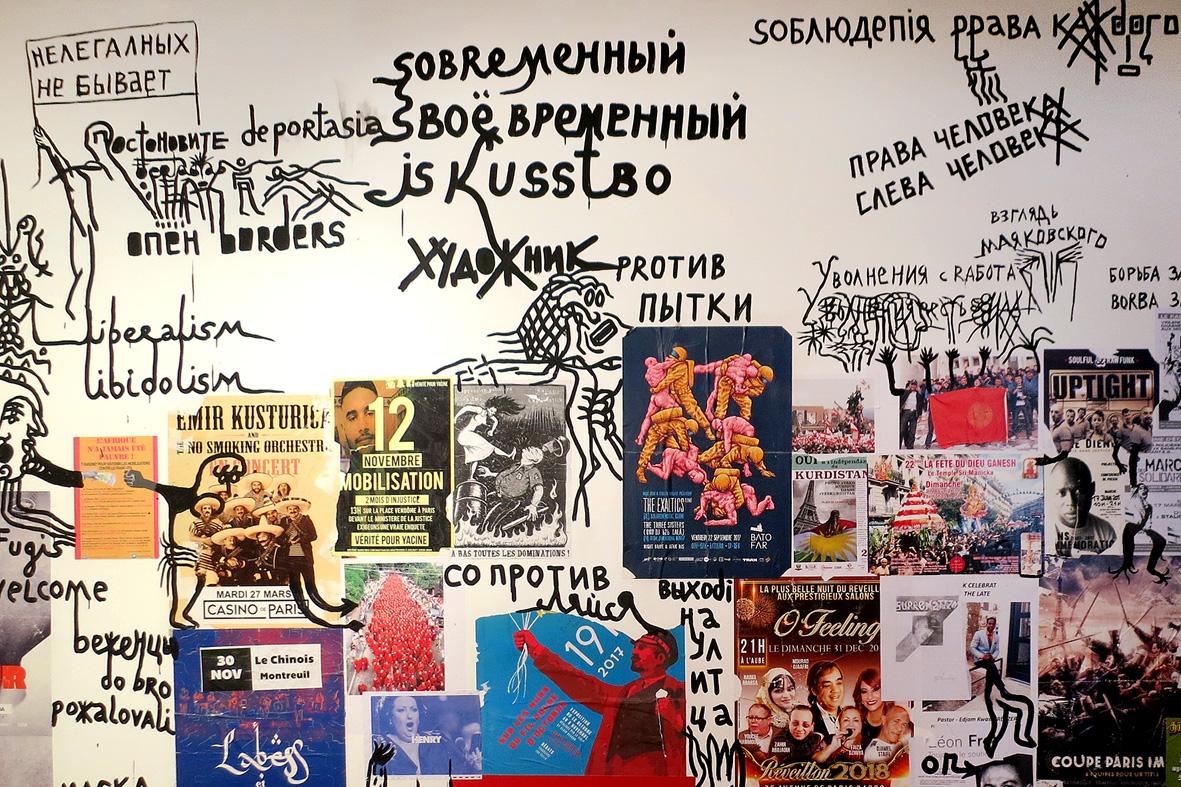 The phrase «Je suis...» in the title of the project accumulates a popular political slogan-prefix, an author's poetic line, an ironic art claim and even a drawing in the spirit of Arabic calligraphy - all these terms work in one bundle according to the laws of the modern information space.

Babi Badalov is an artist and poet, for whom a variety of cultures has become an experience of personal artistic living, and state borders are a bothersome bureaucratic formality. The artist mixes words, slogans, fragments of newspaper headlines and advertising slogans, photographs and posters in his total installations, this mix is encoded and turned into visual meta-poetry. The text becomes an image, and the image is text.

He was born in Soviet Azerbaijan and became the hero of the Leningrad underground of the 90s, he shifted to the cultural contexts of the UK, Germany, America, France - he mastered several languages and melted the archetypes of diverse cultural symbols into his own poetics. Now he lives in Paris, where the actual problems of migration, adaptation of refugees, contradictions and clash of cultures remain part of his actual present.

Babi does not write critical texts, but draws poetic metaphors that reflect his attitude to actual problems. For a person twice stigmatized as «Eastern and Asian» (first inside Russia, and then beyond Russia's borders), the line of demarcation «east-west» remains extremely painful. In one of his graphic works, Babi himself formulates his identity «I am euro-mental». However, its «eastern» roots come out of many European concepts, as can be seen in another of his graphical poems consisting of «root» enumerations: «capital-east, extrem-east, social-east, national-east, islam-east, commun-east, consumer-east, marx-east, teror-east, art-east». The nation and the national explode in «Descrimi-Nation» and «Halluci-Nation». «Political prisoners» are transformed into «poet-prisoners». Moreover, the hope for the future is hidden in the «hopeless» formula «NO (W) FUTURE».
The bright slogan «Je suis» explodes the information space as a formula for resisting terror against dissent, but quickly becomes a meme that is glued to a variety of phenomena and ultimately lapped with ubiquitous advertising. The black square of Malevich is also a vivid dissent, which even after 100 years continues to irritate ordinary consciousness like a peak that can not be circumvented.

For Babi Badalov, «Je suis» (I am) is, first, the formula of a personal relationship. His poetics actively uses the methods of alliteration, anaphora, lexical anagrams and we can no longer say exactly what we are dealing with, visual art or poetry? Probably, the term «paralytic space» suggested by Rosalinda Krauss can give a clue. According to her definition – this is the «space of disputes, quotes, partisanship, betrayal and reconciliation».

In the exhibition «Je suis Mazimir Kalevich», the experience of the past is transformed into the project of the present: here the photo diary of observations of Parisian life, graphic poems, drawings of today merge. The artist also introduced a new film that is flashback to the image of the «east» remote in time and space exists as a dream in the continuous movement of video dance, cut from fragments of an old film. In the exhibition the medium changes, but not the author's method, therefore the film itself is called the poetic line «REREfilm REREpresentation». A double prefix indicates both a repeated, renewed, action, and its counteraction. «What does not fall into our souls is not literature for us». Merab Mamardashvili The phrase «Je suis...» in the title of the project accumulates a popular political slogan-prefix, an author's poetic line, an ironic art claim and even a drawing in the spirit of Arabic calligraphy - all these terms work in one bundle according to the laws of the modern information space.

Round table discussion «The Word as a visual weapon»
https://novymuseum.ru/events-muzeum_news-speech/kruglyi_stol_slovo_kak_vizualnoe_oruzhie.html

Meeting with Babi Badalov in the Great Hall of the Museum of Nonconformist Art
http://www.nonmuseum.ru/index.php/timetable/events/121-babi2018